The audit of our accounts has now been successfully completed.
We are required to publish the notice of the completion on our website as well as putting copies in all the noticeboards. 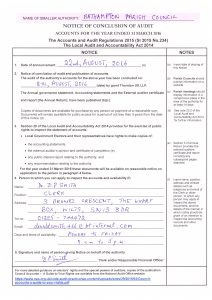 Our accounts have now been approved.
END_OF_DOCUMENT_TOKEN_TO_BE_REPLACED

By now, you should all have received details of 2 green spaces we as your Parish Council would like to preserve as part of the Placemaking Plan. Here is some more detail on this process.

The consultation started in early December on the Draft Placemaking Plan for a seven week period until 3rd February 2016. Details of the consultation can be found on the Council’s website via this link: www.bathnes.gov.uk/placemakingplan.

The Placemaking Plan complements the adopted Core Strategy by providing a set of detailed planning policies and site allocations for Bath and North East Somerset. When adopted, the Placemaking Plan, together with the Core Strategy, will help shape what development takes place and where and will be used for determining planning applications in Bath and North East Somerset up to 2029.

This document has been informed by ongoing engagement and work with local communities. At this stage comments are invited on whether the Draft Plan has been prepared in accordance with legal requirements – ‘legally compliant’ -and whether it is ‘sound’. This is explained in further detail in the attached. The comments received will be analysed by the Council before being sent to the Planning Inspector, alongside the Draft Plan, for Examination next year.

In addition to being available on-line the Draft Plan will also be made available to view at all libraries in the District and the main Council offices (One Stop Shop, Lewis House, Bath; The Hollies Midsomer Norton and Civic Centre One Stop Shop, Keynsham).

Interested parties are encouraged to make comments on-line via www.bathnes.gov.uk/placemakingplan. Alternatively they can request a comments form for completion which should either be emailed to placemaking_plan@bathnes.gov.uk or posted to Planning Policy, Planning Services, Bath & North East Somerset Council, Lewis House, Manvers Street, Bath BA1 1JG.